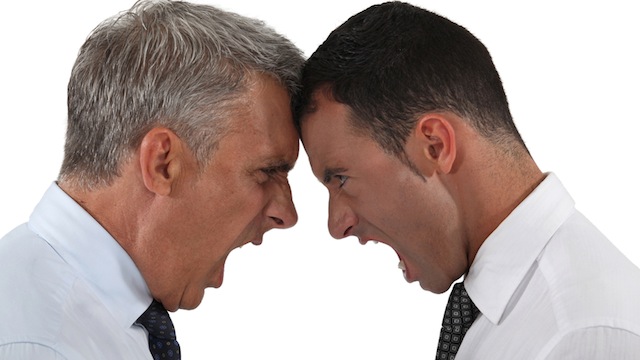 “The courage to be vulnerable is not about winning or losing, it’s about the courage to show up when you can’t predict or control the outcome.” Brené Brown, Dare to Lead

While diverse thinking and disagreements can be uncomfortable, they are more likely to lead partners or a team to make progress, innovate, and come up with breakthrough solutions than consensus than “nice” conversations in which people hold back what they think.

Research tells us that cognitive diversity makes groups smarter. Two heads are better than one, and many heads are even better, especially when everyone is willing to share their expertise and opinions.

Unfortunately, most of us fall into a similar pitfalls. We get sucked into trying to “win” so we look good or don’t make the group we represent look bad, which leads us to ignore logic and evidence that go against our original beliefs. And so we fight without making much progress.

We can change this dynamic and move toward more effective discourse as we exchange diverse ideas and debate by arguing honestly for and against the merits of those ideas by training people to adopt the right habits. Remember we’re all on the same team. Just about all debates fall into one of three categories:

The third is the one that helps us get the most out of a group’s cognitive diversity. To steer people in that direction, set the stage by kicking off the discussion with a shared goal, a spirit of inquiry, and emphasis that everyone is on the same team. Remember:

One of the most difficult and crucial elements of a productive debate is keeping it on one track. We must keep it about facts, logic, and the topic at hand. Arguments tend to fracture, especially when people feel like their ideas or identities are coming under attack. Unfortunately, when people feel strongly about their opinions, they tend to, often subconsciously, resort to logical fallacies, question dodging, bad facts, and outright deception. Or they bring in outside issues to bolster their points and distract people from counterarguments. It’s important for leaders, and participants, to be vigilant, so none of these bad behaviors sneak into debates.

And don’t make or take it personal. Arguments tend to fracture when people feel like their ideas or identities are coming under attack. Emotion and ego begin to play a much bigger role and everyone becomes less likely to appreciate others’ points of view, which greatly reduces the potential for innovation or problem-solving.  To ensure that debates don’t get sidetracked in this way, we need to explicitly depersonalize our arguments.

For a debate to truly be productive, participants need to be willing to respect every viewpoint and change their minds when necessary. This is what psychologists call intellectual humility, and it’s one of the most important skills a good leader and productive debater can develop.

It’s important for everyone involved in a discourse; whether it’s a one-on-one over coffee or a public discussion in a board room; to exemplify these habits. But leaders, or whoever has the most power in the room, should be the first to hold themselves accountable to them.

“If we want people to fully show up, to bring their whole selves including their unarmored, whole hearts—so that we can innovate, solve problems, and serve people—we have to be vigilant about creating a culture in which people feel safe, seen, heard, and respected.” Brené Brown, Dare to Lead

Questions of the week:

Instead of questions like “how could you believe that?” or “why can’t you see?”, pose “what” questions instead, such as “what makes you feel that way?” or “what has led you to that conclusion?”

Take some time to consider and craft questions that you will use to help you and others navigate debates effectively. Share your thoughts and ideas with your team and your leaders, your family and your friends.

Kris Klinger is an accomplished visionary and leader. He lives in Downtown Los Angeles and is a staff and faculty member at the University of Southern California. Kris is passionate about nurturing and supporting strong servant-leader and employee-centric cultures. Cultivating transparency and trust; honest and candid communication; personal and professional development; individual and team empowerment. He is also an author working on his first book. View all posts by k2klinger